Login
← Back to login 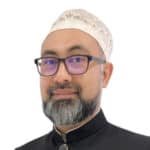 Prof. Dr. Mohamad Haniki Nik Mohamed obtained his Bachelor of Pharmacy (BPharm) from Universiti Sains Malaysia Malaysia (USM) in 1992 and Doctor of Pharmacy (PharmD) from the University of Tennessee (UT), Memphis, U.S.A. in 1996. Completed a post-doctoral fellowship at UT before joining USM from 10 November 1997 until 30 October 2005. Since then, joined the the International Islamic University Malaysia (IIUM), holding the Head of Department and Deputy Dean (Academic Affair) posts, before appointed as Acting Dean of Centre for Foundation Studies for 2018 and the Head of Internationalisation and Global Network for Kulliyyah of Pharmacy and Medicine in 2019.

Teach, train and supervise undergraduate and postgraduate students in various research projects, especially those related to tobacco control. Appointed as an advisor to the Clearinghouse for Tobacco Control (C-Tob) at the National Poison Centre, Penang, as well as a core team member by the Disease Control Division, Ministry of Health Malaysia for the first national clinical practice guidelines (CPG) on Treatment of Tobacco Smoking and Dependence, and Chairman of the CPG on Tobacco Use Disorder 2016. Chief coordinator of the Certified Smoking Cessation Service Provider (CSCSP) programme – jointly organized by the Ministry of Health Malaysia and Malaysian Pharmaceutical Society (MPS). Appointed by the Hon. Minister of Health Malaysia as committee member for the technical working group on shisha and e-cigarettes, expert panel on e-cigarettes, Health Technology Assessment expert (smoking cessation), vice chairman of Translating Evidence Towards Tobacco Control Policy committee and Chairman of Evidence-based Technical Committee for Ministry of Health Malaysia FCTC Steering Committee.

This year, as we are navigating the excitement of a virtual conference, ASC 2022 will introduce a sleeker way of presenting oral communication and e-poster.